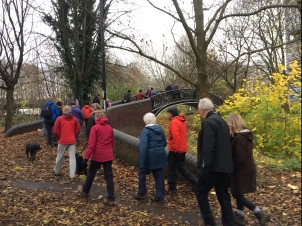 The ninth and final walk of the Coventry Pilgrimage 2018 took place on Saturday November 24th, the Eve of Christ the King, when about 30 pilgrims gathered at All Saints, Allesley, with Bishop Christopher to walk the 3.1 miles via St John the Baptist and Holy Trinity, to Coventry Cathedral.

After a warm and hospitable welcome with refreshments at All Saints, the pilgrims set off after using the Caim prayer to bless Allesley Parish.  After a fairly level walk across grassland, following as near as possible the course of the River Sherbourne, the pilgrims came to housing on the edge of the city.

The biggest hazard was crossing the A45 at Coundon, after which the group crossed parkland to reach the inner city.  A notable stop was at the little ruined mediaeval Chapel of St James and St Christopher, also known as the Leper Chapel, at Spon End, where the Bishop led prayer for work with the homeless.  The chapel now stands in the grounds of Langar Aid House, where several groups cooperate to feed the homeless.

The pilgrims were able to observe the Sherbourne in two places, where it flows under the city centre, before being welcomed at St John the Baptist, where again the pilgrims prayed the Caim prayer.

Because this time the party included members of the Roman Catholic Church of Christ the King, it seemed particularly appropriate to make another halt at the site of the Priory ruins, Coventry’s first cathedral, built during the period when the Church was one, for the Bishop to again lead prayer.  The next brief stop was Holy Trinity, again blessed with the Caim prayer.

The pilgrims finally arrived at the Cathedral ruins, where they were greeted by Canon David Stone, who with the Bishop commenced the closing service with the Litany of Reconciliation.  The party then moved to the Chapter House for refreshments and a time of sharing before the Eucharist was completed in the Lady Chapel.

Anne Dickinson, one of the pilgrims, has written a reflection about the pilgrimage. Read it here and the postscript here.